My wife noticed that a new pho place had opened up close to our house and was curious about trying it out. See more on our Facebook page here…

Something unexpected going down in Chinatown…
Just up the street from that LA institution, Philippe the Original, at the south end of Chinatown on Ord Street is a little shop with a green and white striped awning.   see more on our Facebook page here…

I’ve been talking up this place for quite awhile and so I finally was able to take Irene to try it out. It’s a small restaurant in a strip mall on South Street and Carmenita in Cerritos, CA called Amor Y Tacos.   see more on our Facebook page here…

There are a lot of people who are born and raised in Los Angeles that don’t know anything about their own city. Sure, they know to take visitors to Disneyland or to the LA Zoo but ask them about the Huntington Library, the Arboretum or the Getty and you sometimes get a blank stare. We aren’t so different I guess, I always leave town before I go to a museum or art gallery, which is strange considering the great places that we have locally. In my almost thirty years of living in LA, I had only been to the Getty Center once and had only heard about the Villa once or twice. We needed to change that so we decided to make a day of visiting the Getty Villa in Pacific Palisades, the Getty Center in Brentwood and round it all off with dinner somewhere on the Westside. If you are from the Westside then this may sound pretty pedestrian but to us hardcore East-siders this is a mini adventure!

The Getty Villa is in the Pacific Palisades neighborhood of Los Angeles although they claim Malibu as their home. It is one of two locations of the J. Paul Getty Museum. Oil tycoon, J. Paul Getty opened a art gallery adjacent to his home in Pacific Palisades. As his collection grew he added a second gallery, the Getty Villa, on the property down the hill from the original gallery. Inspired by the Villa of the Papyri at Herculaneum, the Villa incorporated additional details from several different ancient sites. It was designed by architects Robert E. Langdon, Jr. and Ernest C. Wilson, Jr. and opened in 1974. Sadly Getty would never get to visit the Villa himself but upon his death in 1976 he left the museum over $661 million dollars. 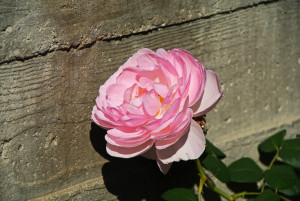 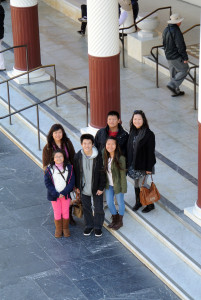 Our friends Spencer, Cindy and Amy and her two kids. 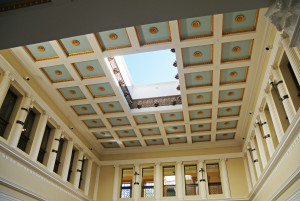 The Getty Villa is an educational center and museum dedicated to the study of the arts and cultures of ancient Greece, Rome, and Etruria. The collection has 44,000 Greek, Roman, and Etruscan antiquities dating from 6,500 BC to 400 AD. The sculptures are truly amazing in detail and it boggles the mind to think that the flowing lines and soft curves are carved from stone. I find it facinating that these sculptures have survived and still retain their beauty. 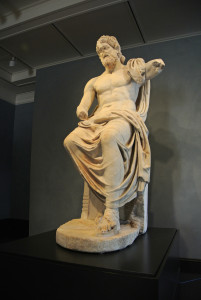 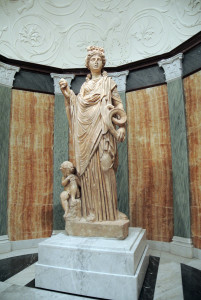 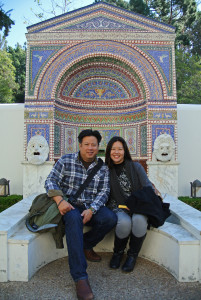 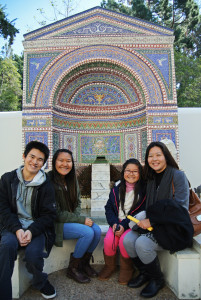 In 1997, portions of the museum’s collection of Greek, Roman and Etruscan antiquities were moved to the Getty Center for display, and the Getty Villa was closed for renovation. When the Villa reopened in 2006, the Getty Villa included a new architectural plan that included buildings that surrounded the Villa, which are designed to simulate an archaeological dig with its many layers. 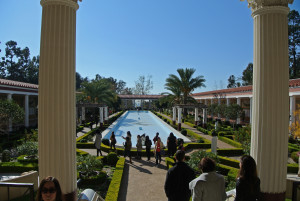 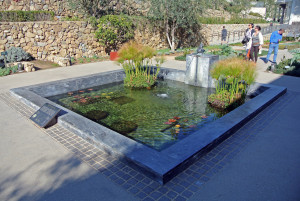 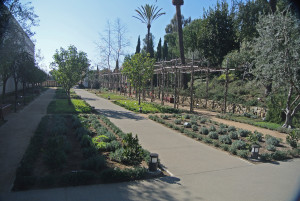 To explore the Getty plan for at least two or three hours. The museum has so much to offer, it can seem overwhelming at first but take your time and wander around its gardens, listen to the fountains and drink in its views. Along the way enjoy an al fresco lunch in its informal, outdoor patio cafeteria. Soak in the atmosphere while strolling through the Roman herb garden and enjoy something that even J. Paul Getty himself never got to experience!

Our next stop is the Getty Center located in the Brentwood neighborhood of Los Angeles. The Center is a campus of the Getty Museum and other programs of the Getty Trust. The Center opened to the public in 1997 and is well known for its architecture, gardens, and views overlooking Los Angeles. The two locations of the J. Paul Getty Museum together draw 1.3 million visitors annually. The Center features pre-20th-century European paintings, drawings, illuminated manuscripts, sculpture, and decorative arts; and 19th- and 20th-century American, Asian, and European photographs. 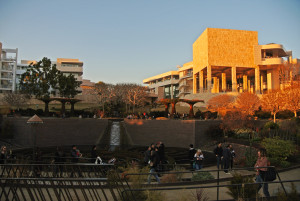 The Museum’s collection at the Center includes outdoor sculpture displayed on terraces and in gardens and the large 134,000-square-foot Central Garden designed by Robert Irwin. Irwin was quoted as saying that the Central Garden “is a sculpture in the form of a garden, which aims to be art.” We got here a little later in the day so it was hard to get photos of the flowers themselves but the late afternoon sun looked great on the buildings! 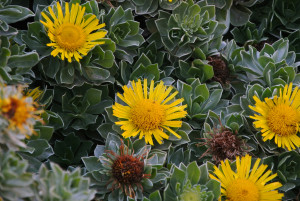 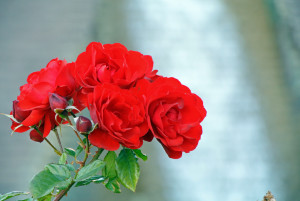 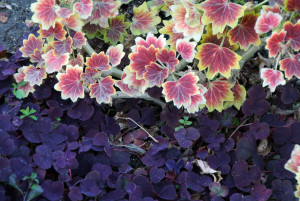 More than 500 varieties of plant material are used for the Central Garden which is always changing and is never the same. 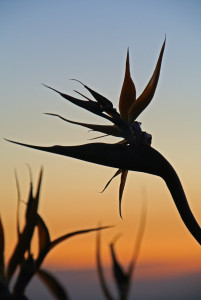 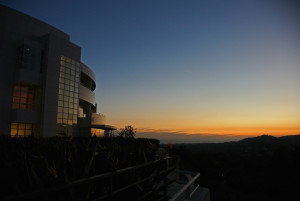 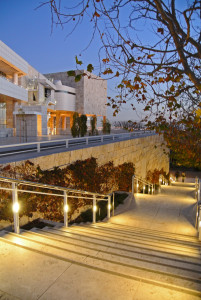 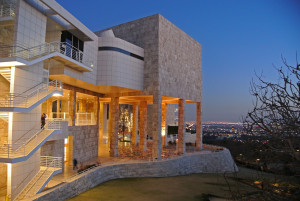 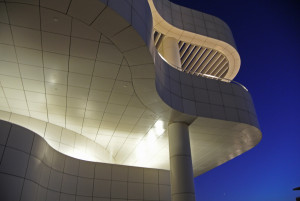 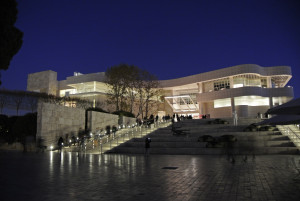 So now its time to get some dinner and where do we go? There’s a lot of options on the West Side but we decide on a San Francisco favorite! The Stinking Rose! Executive Chef and San Francisco restaurateur Andrea Froncillo opened The Stinking Rose in Beverly Hills in 1995 as a follow up to his North Beach restuarant on Columbus. The theme of The Stinking Rose is encapsulated in the restaurants’ official motto, “We Season Our Garlic With Food.”and they aren’t kidding around. If you don’t like garlic then you need to stay away from this place. From the exterior, it may be hard to tell what’s going on inside. They saved all the character for inside the restaurant, to the point of sensory overload. This place is literally devoted to all things garlic… decorations, t-shirts, bumper stickers, hot sauce, cookbooks, you name it and they got it with garlic on it, in it or about it. Understated and reserved it is not.. but the kids loved it! 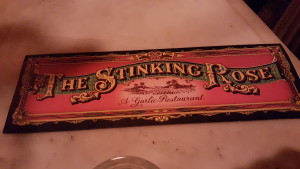 Start off with an order of bagna cauda, literaly means “hot bath” and made with roasted garlic cloves in butter, olive oil and gasp! anchovies… shh! Just ignore that last item and try it out! Smear the garlic clove onto a warm roll and you’ll be in garlicky carb heaven. I could just eat these all night… the food here is suprisingly good and kid friendly. If you must you can always order “Vampire style” and they’ll prepare your dish sans garlic, but why are you here if you don’t want any garlic?? The pasta is perfectly al dente and none of the dishes are overpoweringly garlicky. They manage to use three tons of garlic each month and so they’ve learned how to coax the sweetness and other subtle flavors from the stinking rose. They even have a garlic ice cream, that although we did not get to try any this time, I have had it in the past and I love it! It is a unique dining experience in LA and the service is always excellent. The food is as flavorful as the decor and a must try for garlic lovers everywhere… and if you don’t like garlic well… I’m sorry but you’re gonna have to put up with the rest of us!

To see more pictures from this trip click here…