Located in the heart of downtown Anaheim, the Packard Building and the citrus Packing House are two of the few remaining historical buildings from the agricultural era of Orange County. See more on our Facebook page here…

My wife noticed that a new pho place had opened up close to our house and was curious about trying it out. See more on our Facebook page here…

Just a sample from our trip through Emigrant Canyon in Death Valley. More pics and a report to follow soon! 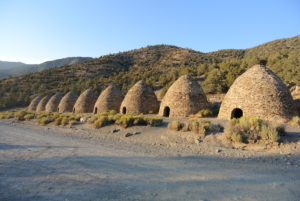 So we survived the labor riots, missing airliners and the huge floods and we are back home sorting through the hundreds of pictures that we took on our wander through Paris. Just wanted to share a pic of Mont Saint Michel taken from the surrounding salt flats! Just a surreal sight to be sure! More pics and a post coming soon! 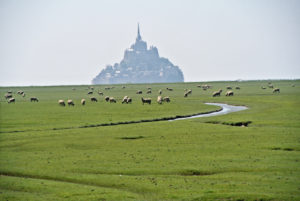 Unfortunately my phone decided to brick itself and so I lost most of my photos but working on getting this post together soon! 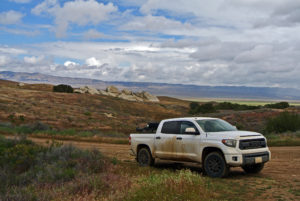 Something unexpected going down in Chinatown…
Just up the street from that LA institution, Philippe the Original, at the south end of Chinatown on Ord Street is a little shop with a green and white striped awning.   see more on our Facebook page here…

What is Pho?
We pronouce it “fuh” with a slightly rising intonation and I’ve heard it pronounced a couple of different ways…

I’ve been talking up this place for quite awhile and so I finally was able to take Irene to try it out. It’s a small restaurant in a strip mall on South Street and Carmenita in Cerritos, CA called Amor Y Tacos.   see more on our Facebook page here…

If you’ve been watching or reading the news in California recently you’ve probably been hearing about the “superbloom” that’s happening in Death Valley National Park. Although some of the stories out there are boasting that this is a once in a lifetime occurrence, it actually happens whenever the particular conditions are right. The last superbloom was in 2005 when that seasons rain and weather cooperated to result in an explosion of wildflowers throughout the park. This years El Niño brought the kind of soaking rains that were needed for the wildflower seeds to germinate and reports started coming in that a superbloom was beginning. Checking out the weather reports for the Valley showed highs in the low 80’s and clear weather for the weekend so I packed up some gear and my family to go check it out for ourselves!

Checking the Death Valley Road Conditions Facebook page told me that the 178 was closed between Shoshone and Jubilee Pass effectively closing off the only paved road coming up from the south of the park, exactly where we want to go… Luckily there is an option. Harry Wade Exit Route, a narrow and rough dirt road that follows the route that Harry Wade and his family found while escaping Death Valley and the ill fated 1849 caravan that found themselves lost in the Valley. Traveling along the southern border of the park before heading up the Amaragosa River valley joining Badwater Road just south of Ashford Mill. This is exactly where we want to be!

Just a quick word about the Harry Wade, although it is deceptively tame looking, this road is not for the unprepared. I’ve traveled this road many times and I’ve seen Jeeps, Landcruisers, and Subarus driving along, happy as can be… But I’ve also seen some Hondas, a few Priuses and now a rented Hyundai Sonata driving down this road. They may have made it through safely and they were either lucky or just good experienced drivers. I can tell you that this road likes to eat people’s tires and it struck again on this trip, taking out my front drivers side tire… not just once but twice on the same trip! Yeah, these are the stock tires but the Michelin LTX AT2 tires have worked great for 12,000 miles and on two Mojave desert and one big Utah National Park tour that included lots of off-road and even driving over quite of bit of really rough lava rock on our last excursion. Just be prepared, this area can be harsh on the dumb and the unprepared… 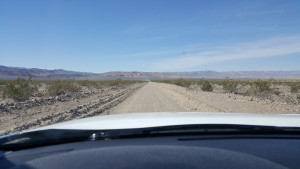 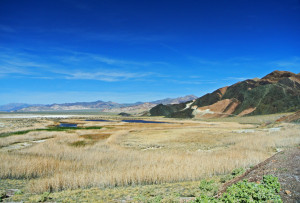 Our first stop is Saratoga Springs, a truly unique and surprising site found in this remote part of the Park. The sight of deep blue water and the deep green vegetation of this riparian wetland in the midst of the desert, nestled against the striking colorful Ibex Hills is just an example of the contrasts that are found in the Park. Although the area around the springs is very dry we find nice pockets of flowers in the area that whets our appetite for more! 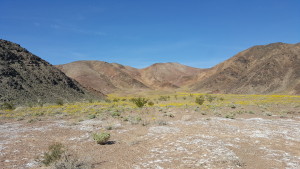 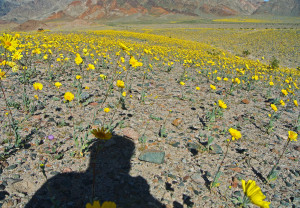 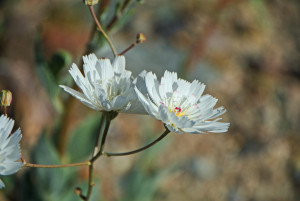 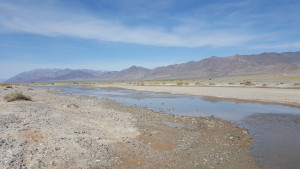 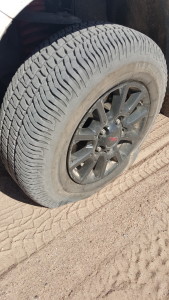 After crossing the usually dry Amaragosa River, the low tire pressure gauge came on. I decided to try to make it to Badwater Road and after getting to the pavement I pulled off to evaluate the tire. Luckily I keep a CO2 bottle to refill my tires on the truck. I almost left it at home for this trip! I found the leak and started trying to plug the leak, four plugs and half a can of fix-a-flat later we had pressure and we pushed on… 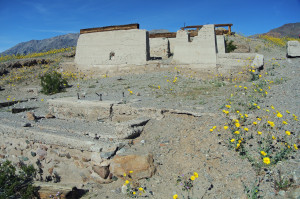 Ashford Mill was our destination and this area did not disappoint with the display! Desert Sunflowers, Desert Five Spots, Blue Phacelia, Sand Verbena and Gravel Ghost were all abundant but the Desert Sunflowers stole the show. Looking in all directions you could see the bright yellow flowers dominate the landscape. It was impossible to properly capture the scene and so far I haven’t seen any pictures that do it justice. Although not as impressive as displays we’ve seen up the coast or even down in Anza-Borrego but for the sheer quantity of flowers, this was a powerful display. 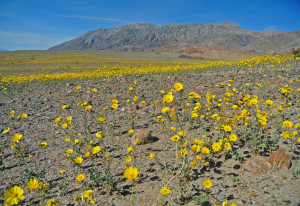 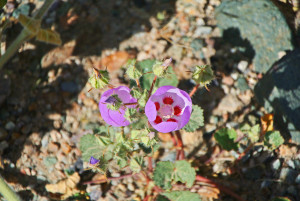 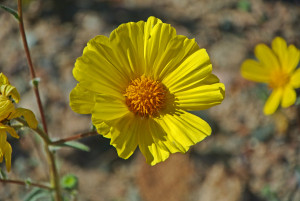 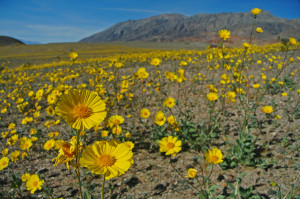 After basking the glory of the flowers for awhile, we decide that since neither my sister or mom had ever been to Death Valley, we should make the drive up to see Badwater and Artists Palette. There were a lot of people in the parks, no doubt here to see the superbloom for themsleves. We were surprised to see that the wildflowers were very sparse around the Furnance Creek area and it shows that the rains that came this winter were sporadic. Furnace Creek received only about an inch and a half of rain, whereas typically we need about five inches for the wildflower seeds to germinate. Obviously further south they received more rain so it’ll be interesting to see once the bloom moves up the park how other areas will do. 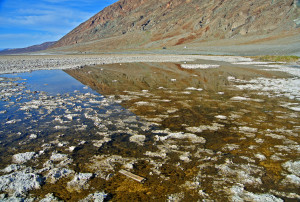 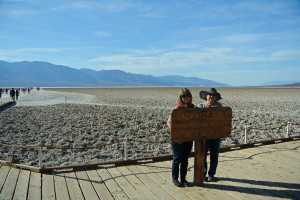 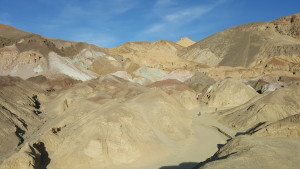 We made a quick stop at the two locations and it was already 4PM and we still needed to get back down the Harry Wade and back home! So I checked tire pressure one last time and we headed home, along the way we got to see the flowers in the fading evening light and the sunset over the Valley. We hit the Harry Wade with just a little sunlight left and knew we would be in the dark by the time we hit the pavement on the 127. About 20 miles out from Baker the tire pressure light went on again, this time I knew that tire was dead. I drove along carefully as long as I could and pulled over where there was a decent room and a straight portion of road so other cars could see me. I pulled out two hi-intensity chemical lights and threw them out on the roadside for a little warning and clicked on the hazards. Remember, changing a tire on the side of the road is very serious business and can be extremely dangerous. You need to watch out for traffic and never turn away from oncoming vehicles. I had a very capable helper in my wife and she’s the head flashlight holder (and I had several flashlights available, for backstory on why click here…) Anyway, long story short I get my full-size spare installed and filled with air. Cleaned up my tools, gloves, jack and tire and we are on our way again in less than an hour total. My reward? The Mad Greek, of course! So our adventure ends where it began, excpet this time I have a peanut butter milkshake in my hands when we leave. If you are ever in the area, do yourself a favor and have a milkshake… they are delicious! 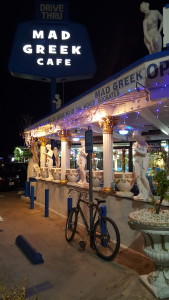