May 18th is our anniversary and in 2003 we celebrated our seven years together by going camping! No, I’m not talking about glamping it up in some resort or cabin… this was honest to goodness sleep in a tent on the ground style camping! Although we had each been camping before when we were younger we hadn’t camped as adults so off to Wal-Mart we go to buy a tent, sleeping bags, chairs, stove, etc. Some of our friends thought we were crazy and I know Irene had to explain to some that I wasn’t forcing her to go. What prompted this trip? Well my Dad had recently decided to get rid of his 1986 Toyota Van. Yeah, that’s right it was called “Van”… this was before the Previa and Toyota was much simpler with names back then… the Tacoma was just “Truck” back in the 80’s too! So I loved this thing, it was originally built as a limo and there were only two built at the time. The other was for the president of Toyota USA. It had two sunroofs, TV, VCR, mobile phone, Alpine stereo with a 5 disc changer, all the best you could buy in the mid 80’s but that wasn’t why I loved it. This van was my Dad’s work car and so although he took great care of it, it was beat up and I could care less what happened to the exterior. I put the biggest, fattest tires the rims could hold and I drove it like it was stolen. Nothing could stop this thing and I loved it! Irene suprisingly loved the Van too and it was her idea to go camping in it. So for our seventh anniversary, we packed up our new camping gear and set out for the California desert, something that I had always wanted to see and check out!

This was our first stop to gas up and I thought this was hilarious. Someone took the time to go out and color match the paint on this sign, drive out to the middle of nowhere, climb up on the sign and make a small but important edit… classic! We had seen a newspaper article about the Trona Pinnacles near Ridgecrest. The Pinnacles consists of more than 500 tufa spires that are formed as a deposit when hot springs interact other bodies of water. The spires rise from the bed of the Searles Lake as high as 140 feet. The spires vary in size and shape from short and squat to tall and thin, and are composed primarily of calcium carbonate. They sit isolated and slowly crumbling away near the south end of the valley, surrounded by many square miles of flat, dried mud and with stark mountain ranges at either side. 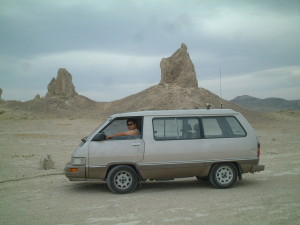 Here is the infamous Toyota Van! 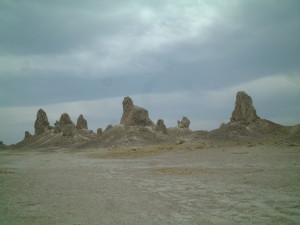 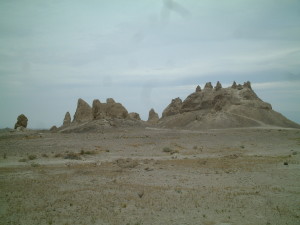 The Pinnacles are recognizable in more than a dozen movies. Over thirty film projects a year are shot among the tufa pinnacles, including backdrops for car commercials and sci-fi movies and television series. 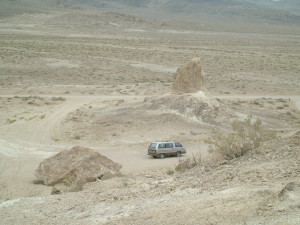 Parting shot of the Van from atop one of the ridges… getting late so better get to the campground! 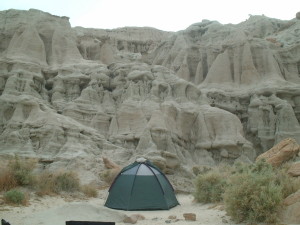 Again inspired by a Westways magazine article we had decided to camp at Red Rock Canyon State Park. Red Rock Canyon features some very scenic desert cliffs and some spectacular rock formations. The park provides some magnificent views of the pristine desert landscape and has a small fee campground with vault toilets and water. Being our first visit we stopped by the Visitor’s Center and talked with a Ranger to get a campsite. She suggested a nice site towards the back of the loop drive along the cliffside that provided some privacy and a great backdrop for our tent! 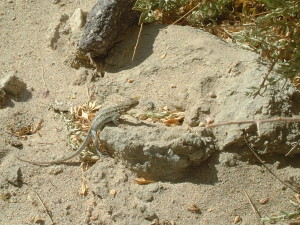 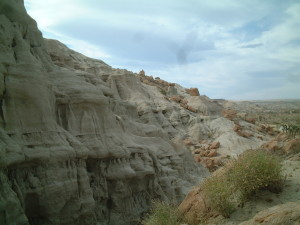 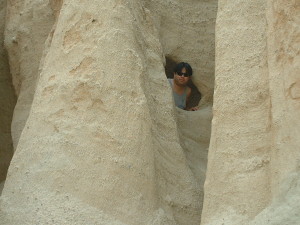 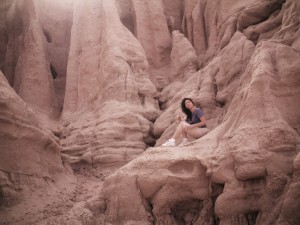 The rock formations here are amazing and we spent a couple of hours wandering around the area behind our campsite. These pictures were taken on my first digital camera, a Fuji FinePix 40, so the quality ain’t great but hey, these are only 1280 x 960! 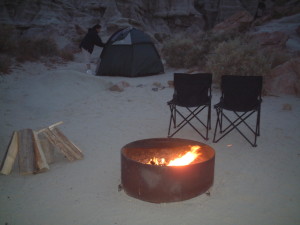 We started up the fire and cooked our first dinner together on our little Coleman stove, this was a great day but now it was getting a little cold so we decide to turn in after watching the stars come out. Later that night I was awakened by what I thought was some idiot that pulled into our campsite. The whole tent was lit up and so I got up to yell at the guy to turn out his headlights. When I opened up the tent I was amazed by what I saw. The entire landscape in front of us, the cliffs behind, and the desert below was bathed in moonlight. The moon had started to rise above the horizon and it had lit up the entire campground. I woke Irene up and we both sat staring out over the scene. We had never seen anything like it before and for many years later I would recall my very first moonrise! 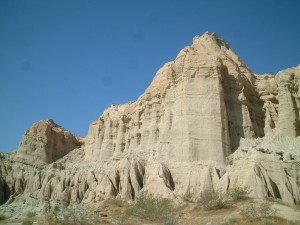 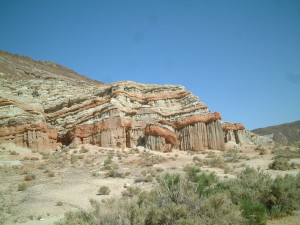 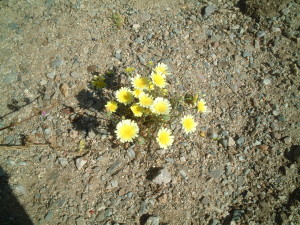 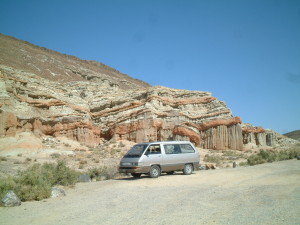 We awoke the next morning early with the sun and made breakfast… Wow, I don’t think I’ve ever smelled anything so good as bacon frying outdoors! We packed up the van and made our way down the loop and checked out the viewpoints around the park. The ranger told us about a place called the Burro Schmidt Tunnel and that it was a little ways off the beaten track but we should be able to make it. Go up the road until you see the billboards and the instersection with a dirt road headed off to the right. Take that dirt road up the mountain and you’ll see the signs for “tunnel”… How could we resist? So we headed up the road and sure enough we find the dirt road, exactly where she said it would be. I have since taken up this practice of giving directions in the desert myself…

“Go along the escape route until you see that it starts to bend to the north and look for the two track headed up the mountain on the left. If you turn north then you went too far and you should turn around… drive up the mountain until you see the square boulder and turn right, go across the gully and then head upstream in the big wash and look for the drop off to the right, if you pass the old Model T wreck then you went too far!”

These are the real directions to Salt Basin! lol… I digress…

The road going up is definitely challenging but not impossible for a 2WD vehicle, you need to be smart about the capabilities of your vehicle. It’s nine miles of rocky and sometimes sandy road that snakes its way along. There are signs but few and far between and sometimes literally nothing more than an arrow and “tunnel” scrawled next to it. I did notice that we passed very few people and they were in fully built jeeps or dirtbikes. Not many other cars in this area and definitely not any minivans! I got a few stares from people as I bounced happily by! If you decide to go please remember that you are in a remote desert area so please be prepared with water and some basic tools to change a tire. You should let someone know where you are going and when to expect your return and be aware of your surroundings.

The Burro Schmidt Tunnel was dug entirely by hand by William “Burro” H. Schmidt. Schmidt had come to the California desert from Rhode Island hoping to improve his health after losing his siblings to tuberculosis. He began his 38 year construction project in 1902, near the site where he had staked a mining claim. It is thought that he meant to use the tunnel as a short cut to carry his ore to a smelter on the other side but it seems unlikely since the tunnel emerged on a high ledge, in the middle of nowhere.

During the years he worked on his tunnel, Schmidt supported himself, not by mining, but by hiring himself out as a ranch hand every summer.  In fact, he never carried an ounce of ore to the smelter despite finding veins of precious minerals in the tunnel. Every fall, he would take his two burros, Jack and Jenny, and head back up to resume excavation of the tunnel. The tunnel was cut through solid granite bedrock and required very little shoring. By 1938 he had dug through nearly 2,500 feet of solid granite using only a pick, a shovel, and a four-pound hammer for the first initial section, and carefully placed dynamite with notoriously short fuses for the rest. It was estimated that he had moved 5,800 tons of rock to complete his tunnel. 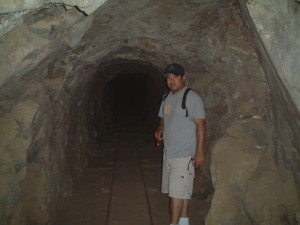 Walking the length of the tunnel only takes about half an hour.  Although the tunnel is in good condition and you can walk upright through most of it, entering any excavations always carries some risk.  If you decide on a visit keep in mind a few things… you will need a good flashlight with fresh batteries, and as always in the desert, bring plenty of drinking water and sturdy shoes. Now my cautionary tale of the trip… In that first picture you can see that I am holding a little red mini maglite. Yeah, don’t use that kinda flashlight… this is a deep dark tunnel, so bring a real one! I had another flashlight but it ran out of batteries halfway thru. Okay, well we brought two flashlights so it’ll be okay. Although I’m starting to freak myself out a little thinking about snakes and earthquakes and getting stuck in a mine collapse… I hand the flashlight to Irene so she can see where she’s going and we keep moving. So you see the hat I am wearing? I loved that hat but it did cut off my vision above my head and especially when I ducked down to get through a low spot in the tunnel. So you can guess I ran right into a overhanging rock! I saw stars and stumbled back a bit and thought, “great… I’m gonna die in this tunnel…” Irene mentioned something about staying awake cuz she can’t drag me back out. Okay, let’s stop for a second and clear my head… I’m alright… so the lesson of the day was, “If you have one, you have none and if you have two, you have one!” To this day I always find myself preparing for the worst! 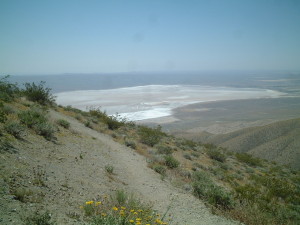 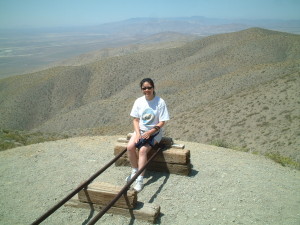 We finally get to the end and, am I happy to be out of that tunnel! The view from that ledge at the end of the tunnel is breathtaking and you can see for miles around. We sat there enjoying the solitude, eating a snack of trail mix and sipping water. Why would he dig this tunnel just to get stranded up here on the mountainside? We may never find out but the tunnel is a testament to his ferocious dedication and hard work. Burro Schmidt died in 1954 and his partner took care of the tunnel until his death in 1963. After that, Evelyn Tonie Seger began caring for the tunnel and lived on the site until 2003. Ms. Seger died a few days after we visited at the age of 95. William Schmidt and Ms. Seger are buried side by side in the Rand District Cemetary. 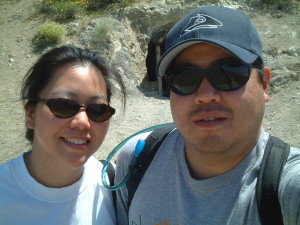 This trip kickstarted the last few years of us exploring and adventuring in the desert and all over the world! I began to realize that we needed a more capable vehicle and some better equipment but it all started here. On a high ledge, on the side of Copper Mountain in the El Paso Wilderness. Keep exploring, keep wandering and you’ll find your own adventure!