So I’ve had my truck now for about a year but I have been so busy with my new job that I never had the chance to really take my truck out and try it out offroad. I had recently purchased a backroads guidebook, Backcountry Adventures by Peter Massey, and was looking at several options. One in particular that intrigued me was Calico Ghost Town and the remote Daggett Wash area that passes through the Ord Mountains. I couldn’t find very much information on this route online and the Backcountry Adventures book rated it as a 3 in difficulty so I was interested in seeing this area for myself.

The previous year had been awesome for wildflowers and our trip to the Antelope Valley California Poppy Reserve SNR was very memorable and Irene’s mom after seeing the pictures of our trip really wanted to go see the Reserve. Armed with a copy of Delorme’s Atlas and Gazetteer we headed out towards Lancaster with plans to see the Reserve with her parents and then Irene and I would go exploring on our own.

On our way to the Reserve we noticed wild poppies growing in the median of Highway 14 so our hopes were high but when we arrived at the Reserve we could tell that the bloom that year had not been as spectacular as the previous year. 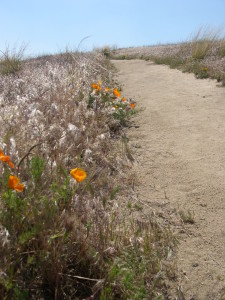 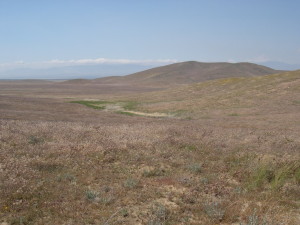 compare this picture in 2006 to 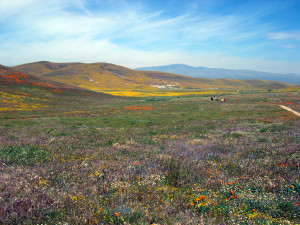 In the short loop hike that we took there were, in fact, very few flowers to be seen so Irene’s parents, disappointed, took off to grab lunch in Monterey Park. I don’t remember why but we decided to take a look outside the park in the surrounding fields and I am glad we did. 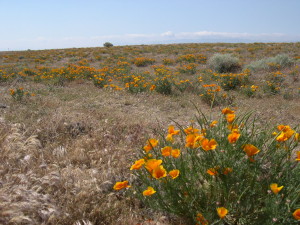 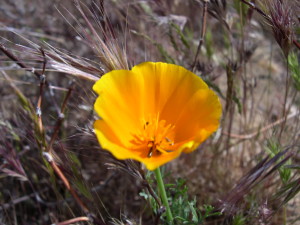 We were rewarded with a nice field of wild poppies just outside of the Reserve. After stopping to take a few pictures we headed out of the Lancaster area on Avenue G towards Barstow. 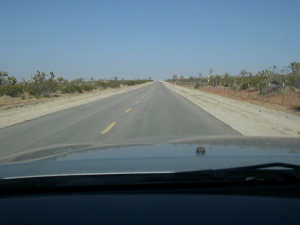 At 200th Street we ran across this abandoned building once called the High Vista Diner, it seemed very out-of-place, way out here in the middle of what seemed like nowhere. There are some other interesting buildings here but I was more interested in hitting some dirt roads so I figured to head back there some time to check them out. I regret that decision as I have heard that in April of 2008 they bulldozed that diner. I have since learned to always stop and check things out if it catches your interest, it may not be there when you return! 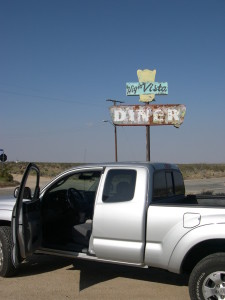 Soon Avenue G turned to dirt and changed to Spirit Mountain Road with 25 miles of wide well-graded dirt until we reached Helendale where we picked up the National Trails Highway or Old Route 66 to Barstow. 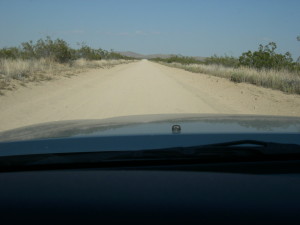 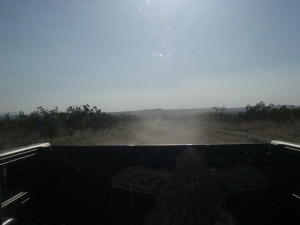 After a good night’s rest at a hotel we are up early to grab breakfast and head over to Calico Ghost Town. Calico is located just three miles from Barstow in the Calico Hills north of the 15 Freeway. Founded in 1881 as a silver boom town it flourished until the mid 1890’s when the price of silver dropped and the area mines were no longer financially viable. Over 500 mines in the area produced silver and borax until around 1907 when the town was finally abandoned.

Walter Knott, who founded Knott’s Berry Farm, purchased the town in 1951 and began restoring and preserving existing buildings and made use of old photographs to rebuild others. Later in 1966 he gave the property over to San Bernardino County who turned it into a County Regional Park. It’s $6 to enter the park and the attractions like the mine tour and railroad ride are extra. In my opinion, you can skip the railroad ride as it is very short and there isn’t too much to see. Although if you have kids with you it would be hard to convince them otherwise. 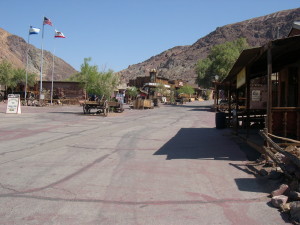 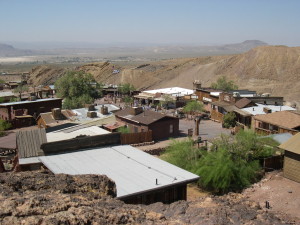 Although it does have a tourist trap, amusement park feel to it, there is some historical value to Calico. The original buildings are remarkably preserved, there is plenty of authentic tools and equipment lying around, and you have the opportunity of entering a real silver mine without the very real risk of getting lost or buried in a collapse. There are a lot of stores with touristy items for sale so if you want an authentic ghost town experience you’ll need to travel to Bodie or Virginia City to get the real deal.

Despite the amusement park ambience, we enjoyed the Chinatown area of Calico if only for the novelty aspect of it. I doubt that this area of town was actually the area where the Chinese community was located. Usually they were located outside of the city in tent encampments. But for the fun of it we tried to envision Cantonese porters and railroad workers from Shanghai relaxing here after a long days work. 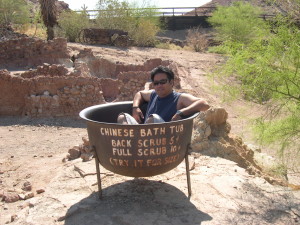 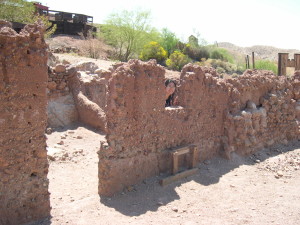 We also enjoyed taking the Maggie’s Mine tour which was interesting. The first part of the mine was very dimly lit, I don’t remember if they suggested bringing a flashlight but I was glad I had more than one on hand. Why did I have more than one flashlight you ask? Several years back we visited the Burro Schmidt Tunnel and the one good flashlight I had overheated and stopped working on us while we were deep in the tunnel. I swore never again would I be unprepared without a backup! They had some nice displays of equipment, minerals, and dioramas that demonstrated how the ore was extracted from the mine. We found the tour interesting and it was a nice break from the hot midday sun. 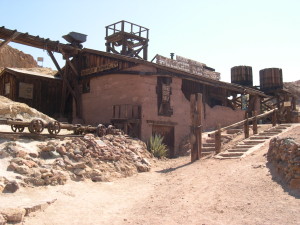 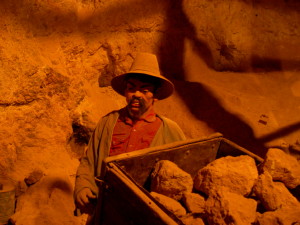 Exploitation of a Chinese Miner 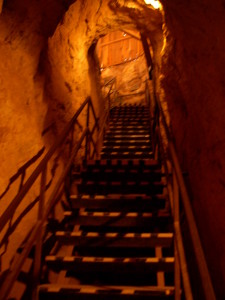 Climb back up to the surface

We rambled through the rest of the town and saw the schoolhouse and various buildings with the requisite souvenir shops inside. In the morning when we entered the park it was nearly deserted. We were able to explore the mine and ride the railroad alone but as the day wore on the park got more and more crowded so we made our way back out of the park. 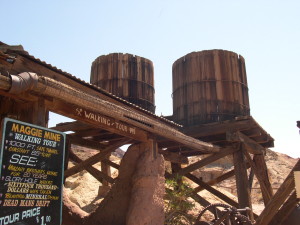 Water tanks and a shot of the water pipe made of wood and wire! 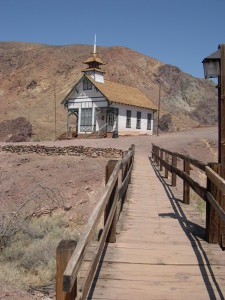 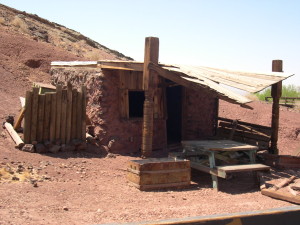 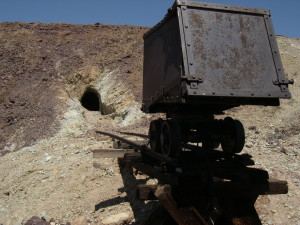 On our way out of the park we noticed some interesting rock formations so we drove over to the overflow parking area for a closer look. I wonder how many people drive right past this formation and don’t even give it a second thought. This entire area is of interest to geologists for the spectacular folds caused by shifting active seimic faults in the area. Seeing these layers of sediment makes my brain start spinning thinking of how much time is represented in these layers and what they could have seen! Also think about the massive amounts of force required to shape these rocks into these gentle bends. 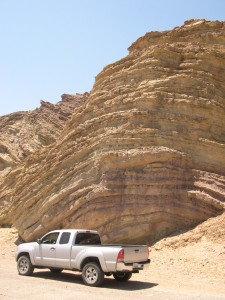 We made our way back down to the small community of Daggett where we drove south of Interstate 40 and found Camp Rock Road. Soon we were on dirt and headed south towards Daggett Wash. 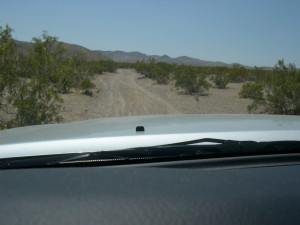 Just outside of Daggett, CA

There really isn’t much information to be found on this 15 mile trail but it is a very remote location headed into the Ord Mountains and provides some excellent opportunities for remote backcountry exploration, camping, and rock climbing. There are old mining sites, cattle ranching operations and most likely ancient habitation sites located in these mountains but since Irene and I weren’t equipped to do much exploration on foot we left those for another time. 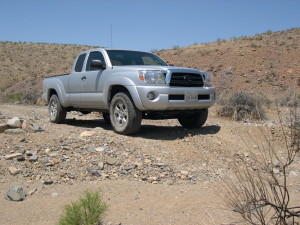 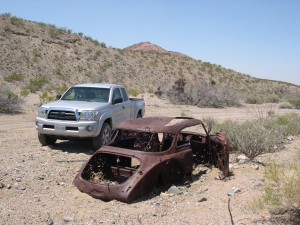 When we finally reached the 247 on the other side of the Ords we looked for the Slash X Ranch and stopped by for a bite to eat before headed back home. Built in 1954 for the ranch hands at the Slash X Cattle Ranch this cafe is adjacent to 58,000 acres of the Stoddard Wells OHV Area. On most weekends you will see dirt bikes, quads, and buggies lined up in front to get a cold beer and some bbq before heading back out to play in the dirt. 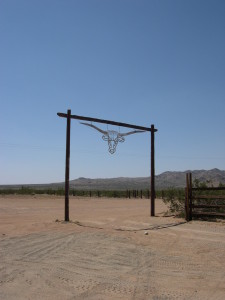 Overall, I think that the Tacoma’s TRD Offroad suspension and tires held up pretty well but this trail was very mild other than some rocky areas at the beginning of the trail. With the tires aired down to about 20 psi and careful wheel placement, the sharp rocks were not a problem and with the rear locker engaged the sandy areas were not an issue either. Looking back now I am still impressed with this vehicles capabilities as a 2wd truck and it has proven to be a capable backcountry explorer.

Some things to keep in mind if you want to check out this area, this trail is very remote and I would strongly suggest being well prepared to survive for a couple of days if you run into problems. This means having plenty of water, extra gas, food, and some basic tools and equipment. We did not see a single person all day until we got back to paved roads again and so if you break down it may be some time before anyone comes along to lend a hand.

For more pictures from this trip, please click here!