The next stop on our itinerary is Venice which was about a four hour drive through Italy. This unique city was established on a group of 117 small islands connected by bridges and canals. The ride over to Venice was nice with the Italian country side for entertainment, we passed a couple of walled cities on hilltops that really looked alluring. We hoped that someday we could return to explore these places. Our first stop was at the Venice Terminal where we were dropped off and quickly led to a vaporetto or water taxi for a quick tour around the city. 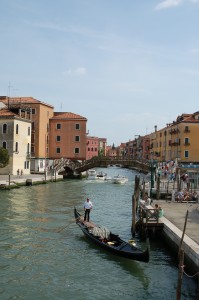 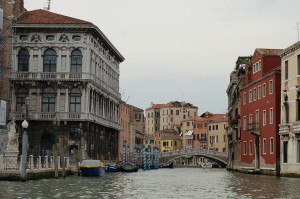 Looking down the Cannaregio Canal and the Ponte delle Guglie from our vapporetto on the Grand Canal. 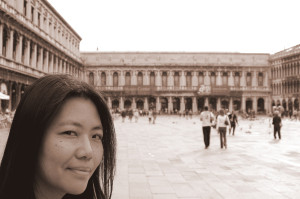 After our quick tour around the city we are dropped off at the very popular tourist attraction of St. Mark’s Square. Here Irene had to brave her fear of birds to enter the square and I watched with much amusement as the bird seed vendors threw seeds towards her to encourage the pigeons to follow her! After hearing so much about this place I was in amazement at actually being able to walk around and take it all in. We joined a tour of St. Mark’s Basilica known in Italian as the Basilica Cattedrale Patriarcale di San Marco. It is the most famous of the city’s churches and one of the best known examples of Italo-Byzantine architecture. They do not allow pictures of the inside of the cathedral so you’ll have to take a tour yourself! The opulet gold mosaics and decor of the interior is impressive and you can see why the Doge’s kept the Basilica to themselves for so long, only after control of the Basilica was handed over to the control of the Patriarch of Venice did it become the City’s Cathedral in 1807. 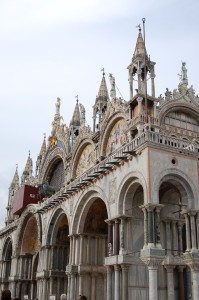 After our tour we were allowed to wander the Square for a few minutes before we were led on a walk through the town. Our guide kept saying that we would walk “slowly, slowly” but then would take off at a quick stride leading us through alleys and squares. “You keep using that word. I do not think it means what you think it means.” 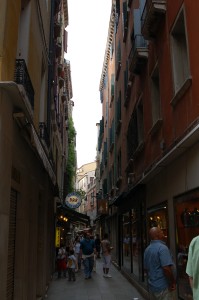 But soon we arrive again at the Grand Canal and for our gondola ride! While not the romantic gondola ride you so often see in the movies, it was an interesting way to see the city as you are much lower and closer to the water. Much too soon the ride was over and we were being rounded up to head back to our hotel located just outside of Venice. The hotel itself was located in the middle of farmland and we had the feel of being in the Italian countryside. I would have loved to explore more the area but by the time we got back and ate dinner it was late and we were exhausted from the rapid pace of the tour. 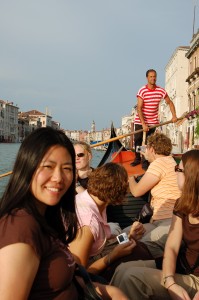 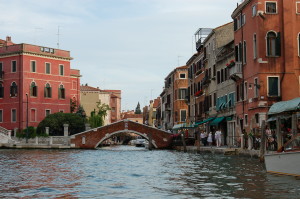 The next morning we were up and out early again, we caught another vaporetto to Piazza San Marco, more commonly called St Mark’s Square. The view from the sea was inspiring and I tried to imagine ancient sailors coming here to see the city floating on the sea. This view was very refreshing as it was a great change from the bus ride, although the coach style bus was very comfortable, especially considering the distances we were covering. 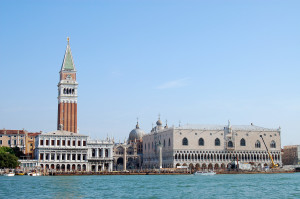 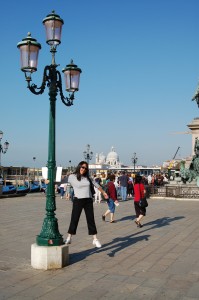 Can you tell that Irene was happy to be here? 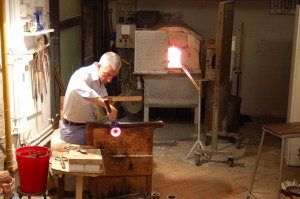 Our first stop of the day was a Venetian glass blowing demonstration. I’m not sure why but I’ve always been interested in glassmaking. Ever since I was just a little kid, I loved watching the glassmakers at Disneyland. I would stand at the display window watching in awe as they transformed the molten blobs into figures or horses or birds. Murano glassmaking is considered by many to be the pinnacle of the art of glassmaking.

Murano glass is made on the Venetian island of Murano, which has specialized in creating fanatastic glassware for centuries. Murano’s glassmakers led Europe for centuries, developing or refining technologies such as the creation of crystalline glass, enamelled glass, glass with threads of gold, multicolored glass, milk glass, and imitation gemstones made of glass. Today, the artisans of Murano still employ these centuries-old techniques, crafting everything from contemporary art glass and glass figurines to Murano glass chandeliers and wine stoppers.

After the demonstration we are led to a Murano glassware store where we pick up a few souvenirs to take home. Once we secure our purchases we head outside and there we are, in Saint Mark’s Square, early in the morning before anything had opened up. We were left to our own devices until our tour of the Doge’s Palace begins. Fairly empty and with all the shops closed I decide that we should just sit and have an espresso at one of the cafes. We pick out a nice spot in the middle of the plaza and sit at one of the tables. We ask for an espresso and water and immediately the waiter begins delivering glasses, a carafe of ice water, the espresso and a biscotti. Could you ask for anything more? A real italian espresso, warm sun on our faces, watching people stroll by while we leisurely chat at our table. Well, as you could have guessed, there was a premium to pay for this experience! To date, that was the most expensive cup of coffee I’ve ever had… live and learn, right?! 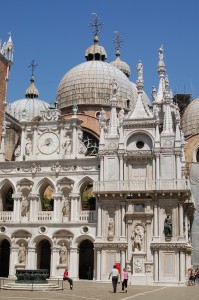 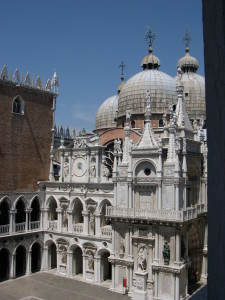 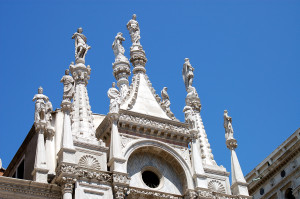 The Doge’s Palace is a palace built in Venetian Gothic style, and is one of the main landmarks of Venice. The palace was the residence of the Doge of Venice, the supreme authority of the former Republic of Venice. The north side of the courtyard is closed by the junction between the palace and St. Mark’s Basilica, which used to be the Doge’s chapel.The rest of the buildings make up the administrative rooms and the Doge’s personal apartments.

Prior to the 12th century there were holding cells within the Doge’s Palace but during the 13th and fourteenth centuries more prison spaces were created to occupy the entire ground floor of the southern wing. A corridor leads over the Bridge of Sighs, built in 1614 to link the Doge’s Palace to the structure intended to house the New Prisons. Enclosed and covered on all sides, the bridge contains two separate corridors that run next to each other. The famous name of the bridge was supposed to refer to the sighs of prisoners who, passing from the courtroom to the cell in which they would serve their sentence, took a last look at freedom as they glimpsed the lagoon and San Giorgio through the small windows. 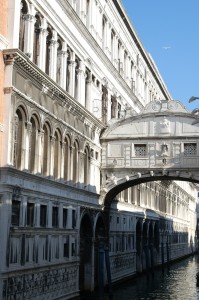 The infamous Bridge of Sighs 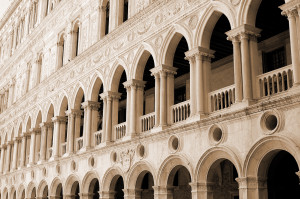 So that concludes our tour of Venice, we were quickly rounded up by our intrepid tour guide, Guy, who tells us to slowly, slowly follow him through the narrow streets and bridges to get back to the bus. So we quickly follow Guy over the cobblestone paved streets to board our bus to head over to our next destination. We say a reluctant good bye to Venice as we are whisked away to Switzerland!